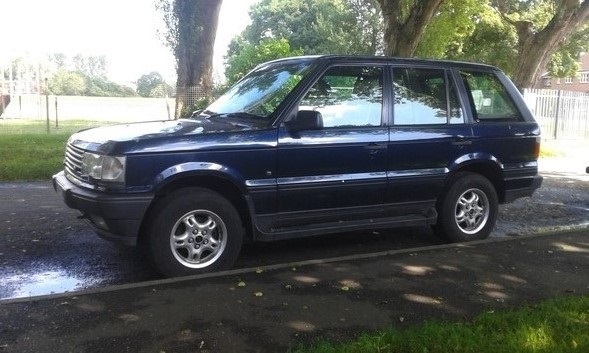 The P38 range rover uses a electronic control unit to operate its electronic air suspension system (AES) this has to be reset after a failure or after any repairs. Every time the ignition is turned on the system checks for faults,a serious failure can lower the vehicle on to the bump stops,the pump turns off and a warning message limiting speed is shown on the dashboard.Although the reset can be done by a Land Rover dealer or some other workshops equipped with the necessary equipment it is possible to do the job with a lap top,a special cable and commercially available software. It is also possible to do the same thing with jumper wires although this is considerably more difficult. I have found that sometimes simply leaving it alone for ten minutes or so will clear faults. These vehicles are also very prone to display faults if the battery isn't holding a decent charge.Changing the front air springs is an easy job needing just two spanners,a screwdriver and pliers plus jacks,axle stands and some wood blocks. 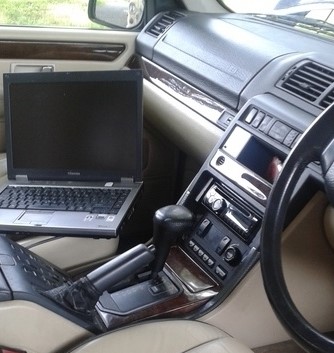 For work on the suspension,clearing faults etc an old lap top/cable and software are easy to use.

My P38 would raise when started,but over time this took longer and longer and soon it got to the point where the vehicle could almost be watched going down at one corner 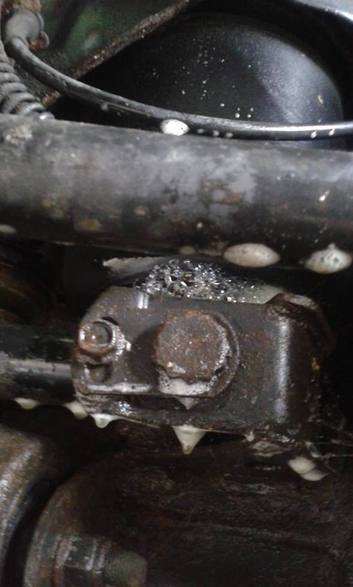 Spraying the pipes and bags with soapy water revealed a leak (just above the bolt head in the picture) The leak was not contstant sometimes raising the vehicle made things worse and sometimes it would almost seem to stabilise this was a result of the rubber flexing making the leak vary.The vehicle was jacked up using jacks,and axle stands with heavy baulks of timber until it was approx at the height it would be when on its maximum height setting.The suspension was then depressurised with a computer and AES software

The wheels were removed with jacks lifting the front axle slightly. It is possible to access the springs,clips and pipes with the wheels on and the plastic wheel arch liners in place but these were removed.The splash shields are held by cheap plastic clips that break and distort easily,new ones cost a few pence 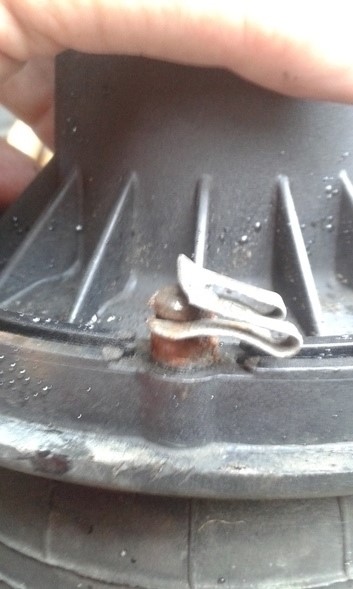 .These clips are removed with a wide bladed screwdriver or similar. Access is reasonably easy 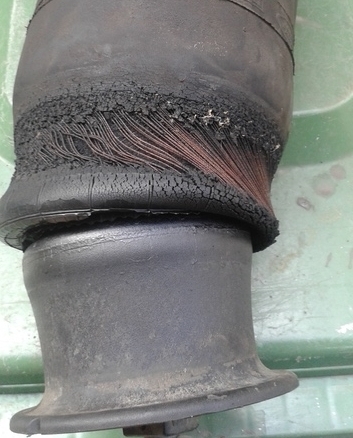 This is one of the air bags removed from the front. Note how badly the rubber had cracked and split yet the leaks were comparatively slow. The bags were replaced with Dunlop items.With a door,bonnet or tailgate open the pump for the AES will not work. When working on the suspension or underneath leaving one open prevents the system suddenly moving the vehicle.

A common fault with the P38 series is a flat battery when the vehicle has been stood for a while.This is said to be because the electronics are too sensitive to stray RF signals. The 'cures' suggested involve removing the RF receivers aerial (its located near the O/S rear window,or fitting an updated receiver. Others suggest leaving the vehicle connected to a trickle charger or disconnecting the battery. After the battery has gone flat the windows will need to be reset by individually sending them up and down to the full limit of travel,the radio might also have to be reset. Always replace or reconnect the battery with a door fully open as it is possible for the vehicle to lock the doors as the battery is connected,for the same reason never leave the keys inside.

I found,after trying various things on my P38 that simply turning the interior light off permanently seemed to solve the problem.

You can e-mail me,click the computers below.