A Real View of Lowestoft on the Sunshine Coast,
the Lowestoft harbour conservation area and the 'improvements' brought about by the sunrise scheme.

"News from the sunshine coast."

Nov 1 2004 with remembrance day approaching work started on digging up the area round the war memorial on Royal Plain .This was for a water feature,part of the Sunrise Scheme.50 yards behind it is another much larger water feature,it's called the North Sea,and was provided for all to enjoy by the Almighty (without funding from the E.U.).

Dec 1 2004 work on building the glorified paddling pool was on schedule.Its meant getting rid of the free sea front car park, apparently this sea side down doesn't need visitors.

Dec 2005 by removing the no cycling,signs kids on mountain bikes and skateboards get to share the promenade with people out enjoying a liesurely stroll.

Feb 2006 The esplanade now has pavements with wavy edges,turning into a giant slalom or chicane.Lowestoft will presumably be hosting the next British Grand Prix.Three more car parks have vanished.Why not park miles away,why not shop miles away.why not just stay miles away?.

July 2006.Barricaded in by over 25 "diversion","lane closed","stay in lane" and "tidal flow not in operation" (yes,really) signs and road cones,and with the news that wastefull district council are to dig the road up and add diversions etc for the next six months the restaurant just down the road closed up .

August 2006.The council have stuck up still more signs and announced three months of roadworks right outside,work on the bascule bridge and still more roadworks are to last till the end of 2007. 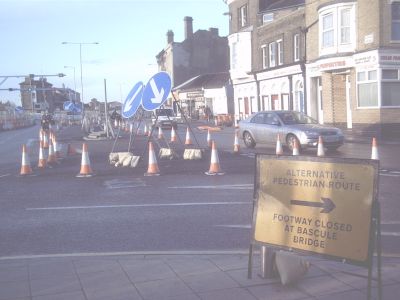 2007 I've closed the shop to concentrate on our mail order of obsolete tools,we've more cones than Mr Whippy stuck outside making collections and deliveries a pain.Shops all over town are complaining about the pemanent roadworks killing trade and,further down the river the council have slung out eight firms so they can take over their land for fancy offices.HRH the Princess Royal came to mark the 'end' of the scheme in April (after two days were spent washing the traffic cones!) but the roadworks and chaos are still going and the council have now banned all vehicles from ever loading and loading anywhere near my shop........................Hello and "Welcome to the Sunshine Scheme."
Early in 2008 WDC won a prize for their Sunrise Scheme.The minister presenting it said the scheme had provided 480 new jobs and encouraged 53 new firms to Lowestoft.When it emerged he was in fact quoting from the entry form WDC had filled in.he and the 'manager' of the sunrise scheme who invented the figures in the first place were asked to name these firms by various people.So far they have been unable to name more than two.What a load of rubbish.
July 2008.Work that was supposed to have finished in December 2007 to repair the bascule bridge hasn't finished.Further repairs are to be delayed till the winter so as not to impact on the Air Show.Meanwhile the rest of us have to just muddle on.
Return to baconsdozen.